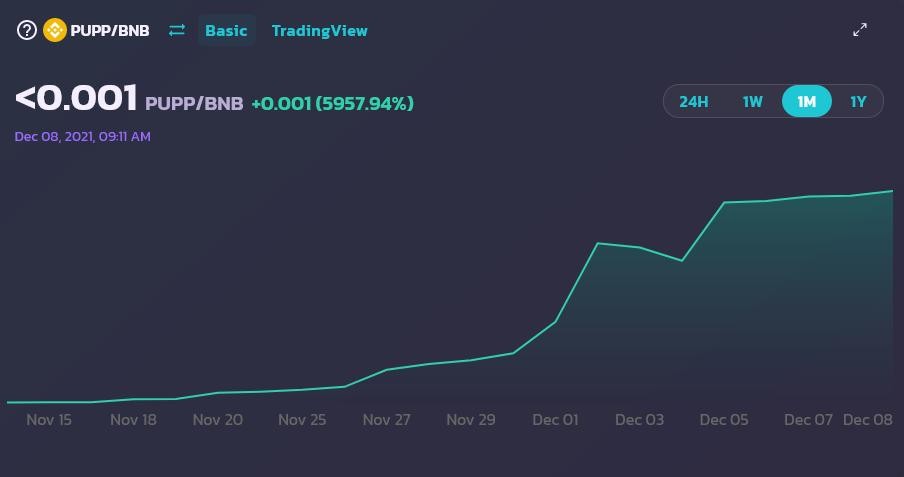 Less than a month has passed since the creation of Puppy Coin and its ever-increasing course 59X in 23 days proves that Puppy Coin came to stay!

Puppy Coin Team is doing great job promoting and establishing this new meme coin in the crypto market world. In 2022 perhaps a big surprise awaits us since many unknown cryptocurrencies appear on this competent crypto market.

Puppy Coin has been following a frantic course in recent days, after the release of 100.000 Puppy Coin Airdrop! Unknown and stable until now, Puppy Coin reached the amazing price of 0.00912 USD per coin this morning, +5900% its value since the beginning, according to PooCoin Charts.

Its Puppy Coin Airdrop announcement seems to have played an important role in launching the value of the cryptocurrency, which was created in early November 2021. Puppy Coin creators explain that they hope that Puppy “will be able to function as a currency capable of maintaining its market value, regardless of market instability“. 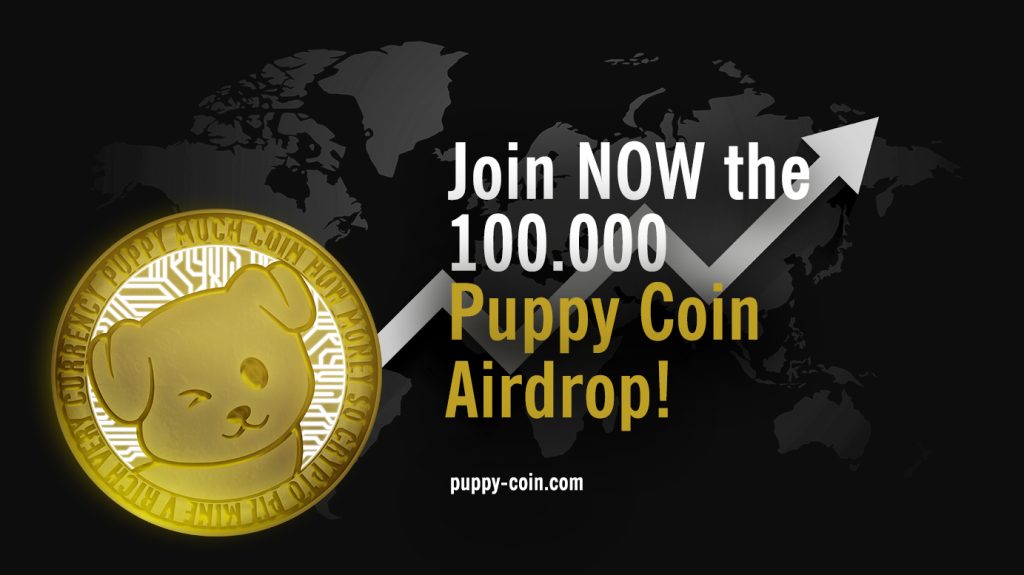 Do all cryptocurrencies value?

Of course not! In early November, another cryptocurrency followed a dizzying rise, before collapsing spectacularly: Squid, in the name of the worldwide television hit Squid Games. It started at $ 0.7 on October 21 and reached $ 2,856 in ten days. A day later, it dropped to $ 0.003. Users discovered that they could not sell it and encapsulate their profits and its creators disappeared from social networking sites.

So, be aware of where you put your trust on. Not all cryptocurrencies came to stay. 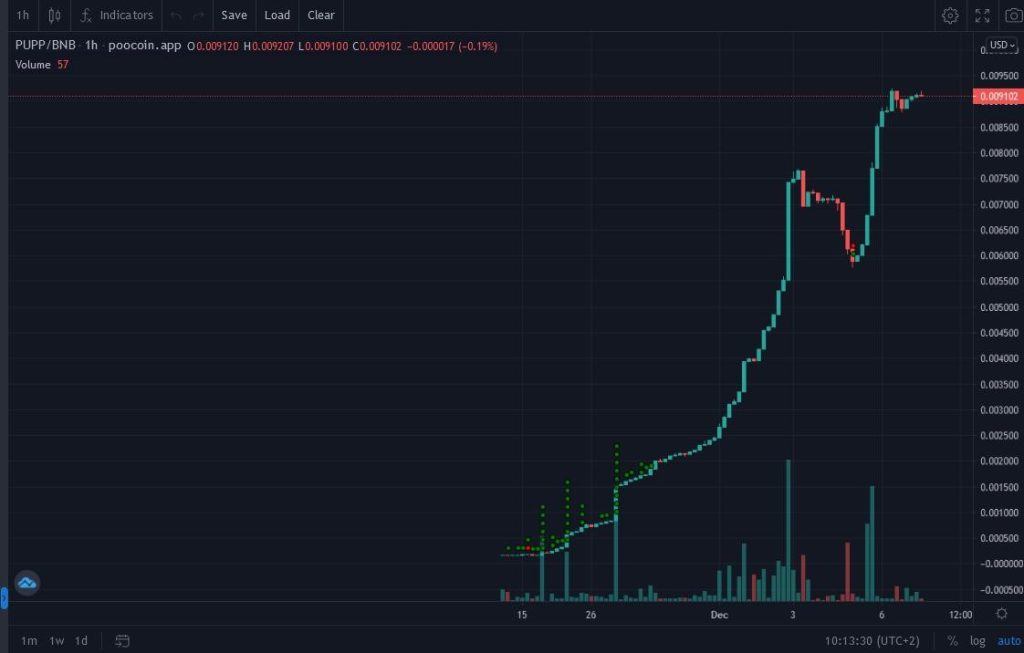 Why are cryptocurrency forecasts so uncertain?

Forecasting for stock markets and markets in general is considered a very difficult process that usually does not have much success. After all, who can predict the future with certainty?

That is why the few who manage to fall within their forecasts are called “market gurus“. The crypto market is very new and most of the digital currencies that are popular today have only grown in recent months. So, no comparisons can be made, as there are no strong performance patterns.

Thus, it is very difficult to make estimates, even for the most “stable” cryptos, such as Bitcoin and Ethereum. Especially for newcomers to the market such as meme coins. Only Doge Coin has proven its value and it seems like Puppy Coin is the 2nd meme coin to follow up.

Therefore, the only approach that could make sense to “guess” which cryptocurrencies will go up in 2022, is to see what they did in 2021, what are the reasons that make them popular and what market experts say about their prospects.

Which cryptocurrencies will go up in 2022?

First of all, you have to remember that there are no “best cryptocurrencies“. There are only forecasts from various sources that you can consult.

The constant value of the crypto ecosystem. It accounts for over 40% of the market and is the reference cryptocurrency. In other words, it is the Street Wall Street of crypto, in the sense that everything that happens in Bitcoin affects the entire market.

Also, due to its size, bitcoin is dragging the market up and down. So, if the market goes up in 2022, the price of bitcoin will probably go up as well. As for its prospects, much will depend on the general market climate but also on the efforts of regulators to set limits on crypto.

2. Ethereum: Will it surpass Bitcoin?

This is the big question for 2022. Maybe bigger than whether we will see Bitcoin at $ 100,000. Ethereum managed in the second half of 2021 to record successive historical highs and reach the milestone of $ 500 billion in capitalization.

It is the second largest crypto that wants to dethrone Bitcoin. If his steady upward course continues in the coming months, then it is not excluded that he will claim the throne.

JPMorgan estimates that Ethereum is the best investment you can make in cryptocurrencies, in an environment of rising interest rates, when the US Federal Reserve has already hinted that it will start raising interest rates by mid-2022. Ethereum jumped by 500%.

If Ethereum wants to dethrone bitcoin and become the king of cryptocurrencies, then Solana will seek to become… “caliph in place of caliph“. It is no coincidence that it has been marketed as the “killer of Ethereum“, as it is faster and allows more and cheaper transactions.

For some, Solana is the new Ethereum, the crypto that will prevail in applications dominated by smart contracts, but this remains to be seen in practice. Solana’s growth in 2021 was more than impressive.

Cardano managed to rise 800% in 2021 and even reached the 4th place in the list of the largest cryptocurrencies, behind only Bitcoin, Ethereum and Binance Coin.

It is considered a third generation cryptocurrency that can provide important solutions to the ecosystem. However, its price was hit hard when the popular eToro platform announced that it would take Cardano out of the exchange by the end of the year.

On November 24, Cardano entered the European Bitstamp platform, somewhat offsetting the negative impact from the US. Some forecasts want Cardano to jump to $ 4.44 at the end of 2022. If confirmed, Cardano has a 180% growth margin.

Puppy’s Coin course in the last 23 days has shown a 5900% rise in charts. This is certainly a big deal for a new cryptocurrency in the ever competitive crypto market. We look forward to seeing great things happen in 2022 for Puppy Coin. Stay tuned, the best things are still to come and about to happen!

Where to buy Puppy coin